I got quite a pleasent surprise today while I was placing an order with Microsoft for a new Dynamics NAV (Navision) customer. While I was clicking through the granules, I was looking for the dreaded granule 9100 – Dynamics NAV Server to add to the price list  and this is the screen that I spent 15 minutes on: 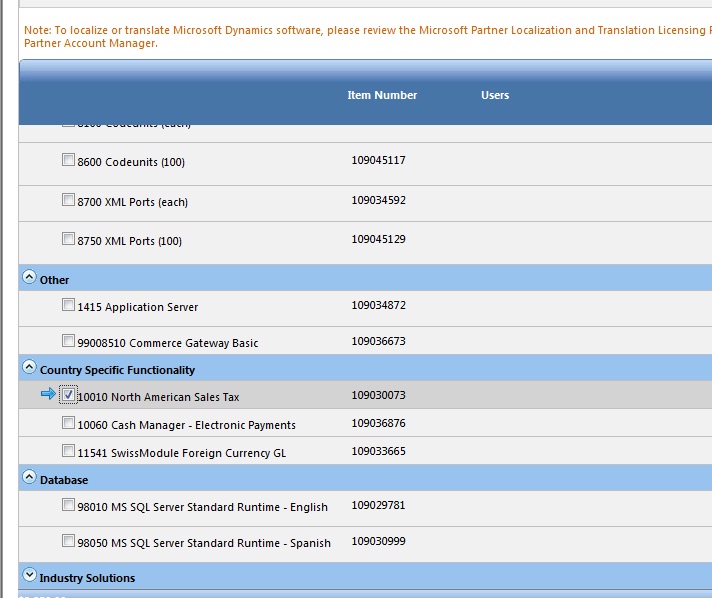 Notice anything different? That’s right, granule 9100 is no longer there!! I originally thought it was a mistake and clicked back and forth, deleted and re-created the order just to get the granule to pop up. Sensing something good was going on here, I went ahead and processed the order just to see what the license would look like. If it was missing due to a mistake, I can always just write a sales support to the ordering desk and have them add it for me.

For those of you who don’t know, granule 9100 is a granule that you much purchase to have the privilege to use the Role Tailor Client or RTC. Here’s a blog article that mentions it:
http://dynamicsuser.net/blogs/mark_brummel/archive/2009/11/18/granule-9100-dynamics-nav-server.aspx

After the order was processed, I did a quick search on Partnersource and couldn’t find any mentino of granule 9100 being removed. So I went directly to the Price Sheet Explanation document and this is what I found:

Happiness! The granule is, as of December 15th 2010, included in the Foundation pack. Now we don’t have to charge the customer extra just to have RTC capability!

One question remains though is what about the customers that purchased the granule? How does their enhancement play out? Do they get a credit? I’d be a little upset, not because of the amount of the granule, but because I’m being punished to be an early adopter.

7 thoughts on “Dynamics NAV Server granule – Where did it go?”